The tools to take your role playing, combat, and enjoyment to the next level.

Playing D&D with friends can be a lot of fun, but furiously searching through a book to see what your Armor Class is while wearing Padded Leather Armor is not fun. Having to search through books to find all sorts of information slows down the game significantly, and can be very distracting to others. Adventurer's Codex solves this problem by taking away the burden of managing your character's abilities and various calculation you'd have to frequently perform. Here's what Adventurer's Codex helps with:

A character's performance, in and out of combat, is fully driven by their Ability Scores. Stats helps with tracking those scores and many other important numbers.

Hit Points might be one of the messiest parts of paper based D&D. Having to constantly erase your Hit Points, calculate the new number, and write it down only to erase it and start over again in a couple of minutes can be very frustrating. Easily manage your Hit Points and temporary Hit Points here.

Each character has as many Hit Dice as their Level. This is usually pretty easy to remember, but why should you? Adventurer's Codex automatically assigns you the number of Hit Dice equal to your character's level. Each Hit Dice can be toggled to indicate usage, and will be automatically reset upon a Long Rest. 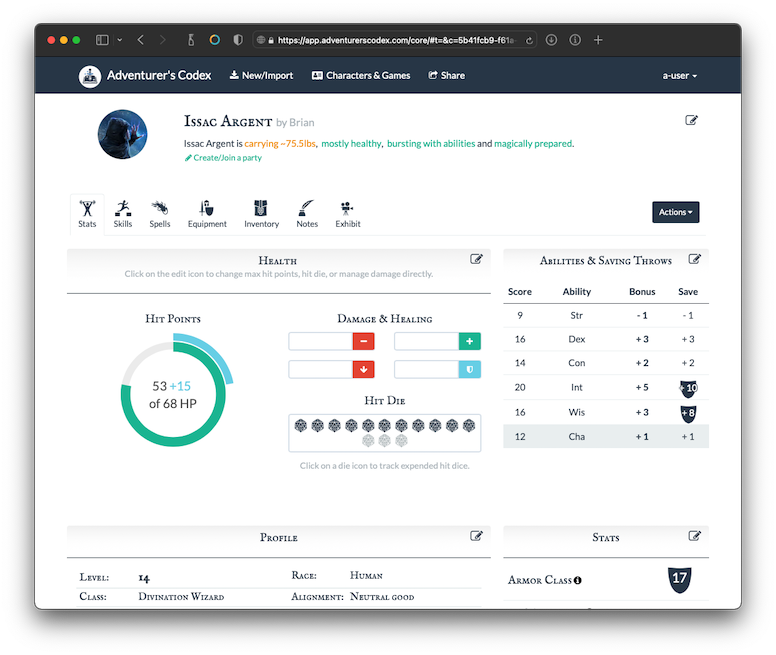 An Ability Scores' modifier is automatically calculated for you. The formula used for that calculation is:

Savings Throws take into consideration your Ability Scores' modifiers automatically. They also take into account any custom modifier your character may have and use your character's Proficiency Bonus, if it is checked.

Have fun creating your character! What kind of person are they? Where did they come from? Did they get that scar across their cheek from a life on the streets or working in the smith with their loving family? Take your time tweaking your character to make them as intriguing as possible.

Other Stats is where many other important values are kept, such as, Armor Class, Initiative, and Proficiency Bonus. Armor Class is automatically calculated based on the armor your character has equipped. You can also add a custom modifier that will be included in the calculation. Proficiency Bonus takes into account your character's level and is calculated using the following formula:

Initiative simply takes into account your Dexterity modifier and any custom bonus that is present. Initiative and the previous two stats have further detail on what data is used to calculate the final value. Simply click on the information icon.

Being able to perceive that pit fall trap ahead of you or having medicinal knowledge to know your ale is poisoned. Skills helps with showing you how good your character is at all of that.

Each class and race has its advantages and limitations. Adventurer's Codex helps you manage these abilities, as your character continues to grow. All Features, Feats, and Traits in the SRD are available to be auto-completed! Some abilities might only be available a certain amount of times per day. For those abilities, we have Tracking.

Any Feature, Feat, or Trait can be added to the Tracker. When adding a new item, simply enable the Tracked functionality and fill out the new fields that pop up. Once that is completed, the item will automatically be added to the Tracker. Features, Feats, and Traits marked to reset on Long or Short Rest, will be included when the appropriate Resting action is selected. 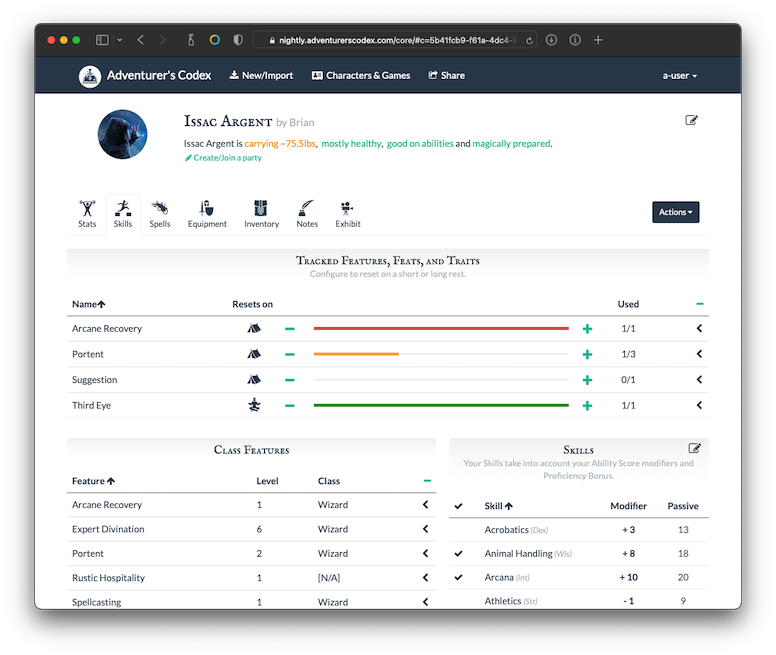 All Proficiencies and Languages in the SRD are also available to be auto-completed. This provides an easy way to keep track of all the things your character has learned throughout their travels. Later, we are planning to have Weapons and Armors be able to know what you are proficient in by looking at this list, but for now it's a great way to keep all your ducks in a row.

Skills, also, automatically calculate your Passive Scores for all Skills.

Whether it's raining down a fiery inferno upon thy enemy or dolling out some Cure Wounds to your wounded teammates, Spells is the place to be.

Track your character's magical potential by adding Spell Slots. Spell Slots can be designated to refresh on a Short or Long Rest.

Spell Stats offers a simple way to keep track of what bonuses your character gets when they cast spells. The values put in Spell Stats will be used in Spells. 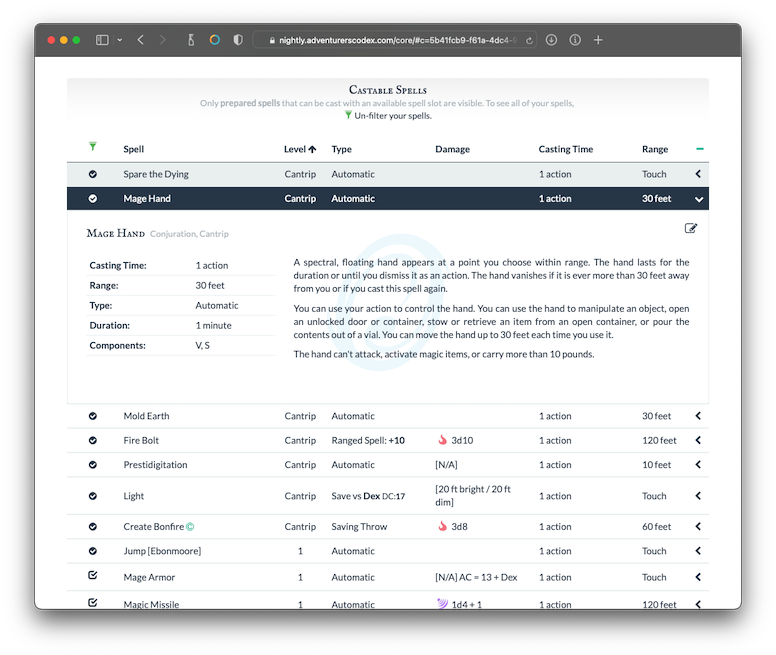 All spells in the SRD are available to be auto-completed. Spells that have the Type "Attack Roll", will have the "Spell Attack Bonus" from Spell Stats added to the Damage column.

No adventurer is complete without proper weapons and armor. Adventurer's Codex provides an easy way to manage your equipment, and, of course, all weapons and armors in the SRD are available for auto-complete.

If your character does a lot of attacking with their brawn, rather than their wit, Weapons is just the thing you need. To Hit is automatically calculated for you on all weapons using the following formulas: 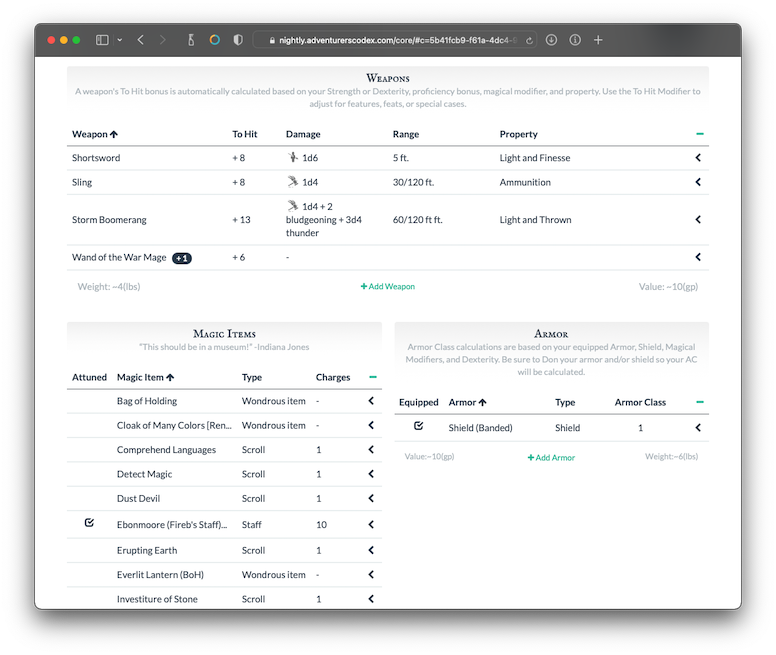 Wearing armor can sometimes be unconfortable, but taking an arrow to the knee is even more unconfortable. Good thing that equipping armor in Adventurer's Codex is so easy. Simply open up the armor and Don it. Remember, you can don armor and wear a shield at the same time for maximum AC! Here are the formulas for calculating your armor class:

Add all those common traveling essentials, like Abacus, Lute, or Shovel to your backpack.

Did you know a Bag of Beans explodes when dropped? Me neither. Magic Items can be marked as Attuned or not, and for magic item with limited use, charges can be easily tracked. 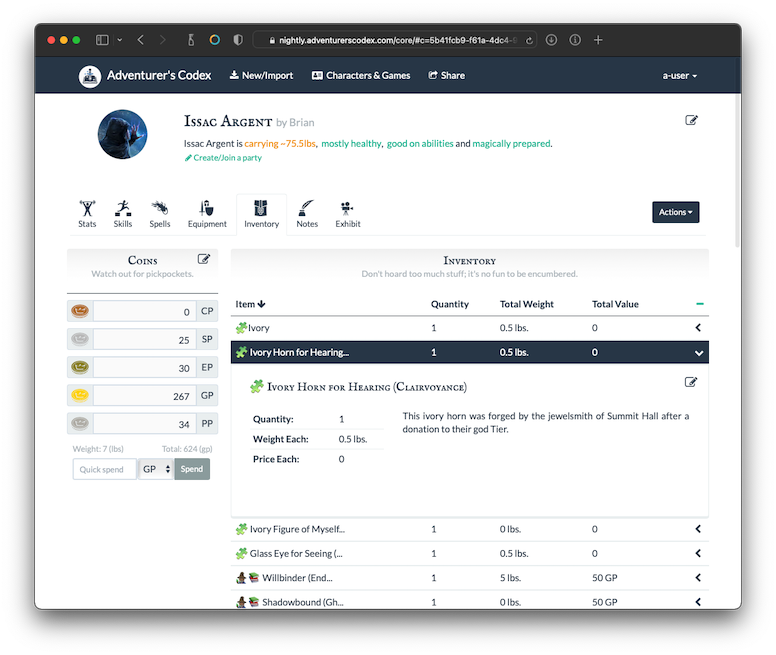 Store your coin here! From left to right, you can add your Platinum, Gold, Electrum, Silver, and Copper. Once you're done adding your coins here, we calculate your total coins worth in Gold.

Every good adventurer keeps their trusty notebook with them at all times. Notes helps you remember the names of the various NPCs you've met in your travels, or maybe you just want to keep track of how many times the Drow Rogue has tried to "count the coins in your purse." You can add as many pages of notes as you'd like, and all notes have Markdown support. 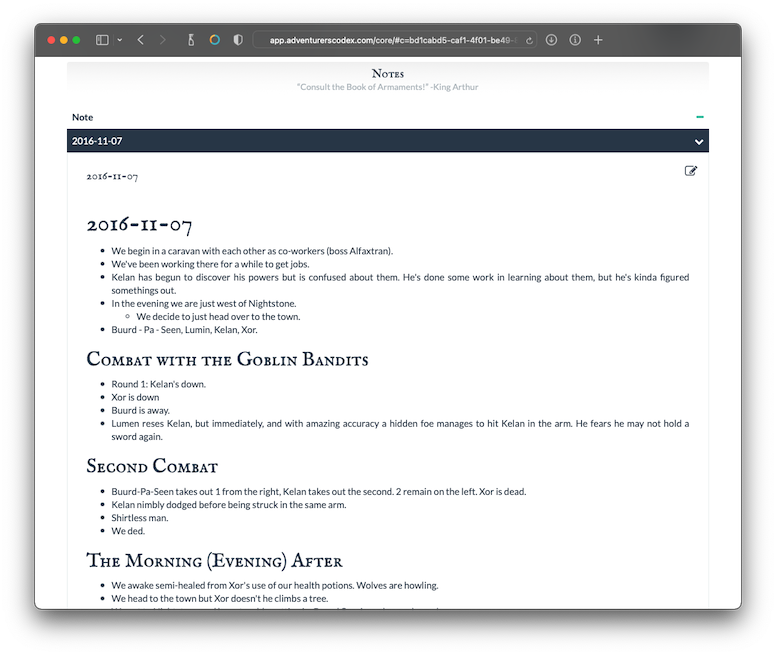 In the Exhibit tab, a DM can display a map, image, or environment to the party. The Exhibit tab is the Adventurer's Codex interpretation of when a DM shows the party a picture of a creature or NPC via a book or drawing in an in-person game.

Clicking on the image will display it in full screen. 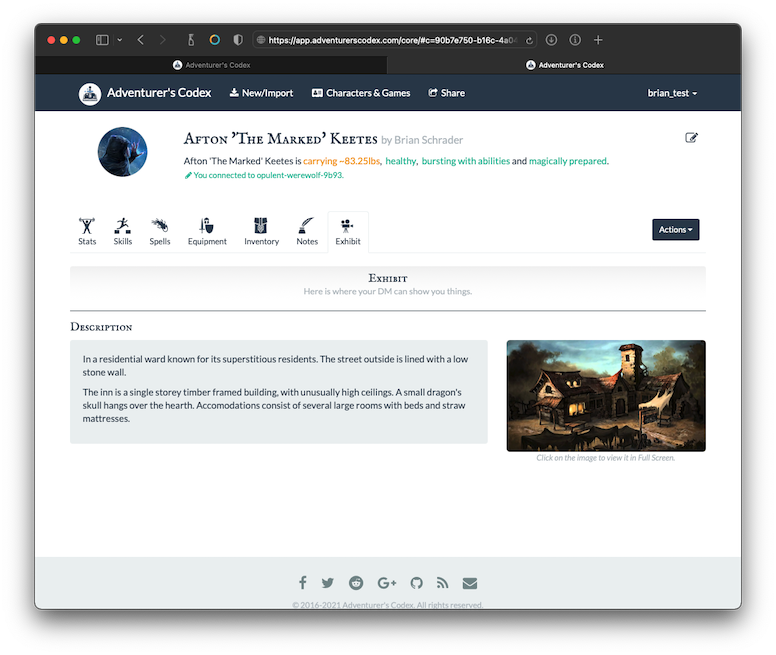 Adventurer's Codex provides a lot of slick features, like all the ones mentioned above, but there are so many more not-so-obvious features.

Move between tabs as quick as the wind itself using our Hotkeys. Press the number keys from 0-9 to change sections.

Due to recent changes, Importing and Exporting has greatly changed. Characters and Campaigns now live on Adventurer's Codex servers and are accessible through your account on any device (phone, tablet, laptop, etc).
If you have an exisitng exported file, you can still import that file into Adventurer's Codex and it will be uploaded into your account on our servers.
If you want to share your character with others, you can use the Sharable Sheets feature. Read more about it here.

What does your character look like? There are 3 ways to add a profile picture:

Adventurer's Codex has come up with something brand new and unique; the Player Status Line. The Player Status Line gathers up all the character's data in order to give you their status. Currently, we have two statuses, but plan to add more in the future.

Encumbered Status:
Sums and displays all the character's items that have weight.
The weight will be color coded based on if your character is encumbered or not.
Blue: Well within your carrying capacity.
Yellow: Carrying quite a bit of loot. Over 5x your Strength.
Red: Slowed and encumbered by all the loot you're carrying. Over 10x your Strength.

Tracked Abilities:
The status and color change as your tracked features are increased or decreased.
Green: bursting with abilities.
Yellow: low on abilities.
Red: out of abilities.

Magical Potential:
The status and color change as your tracked spell slots are increased or decreased. The higher the slot the more valuable in the calculation.
Green: magically prepared.
Yellow: magically strained.
Red: magically depleted.

Inspired Status:
Indicates whether your character is inspired.

We've put together a full compendium of everything available to autocomplete in Adventurer's Codex. This includes all of the Features, Feats, Traits, Spells, Weapons, Armor, Monsters, and more that we automatically pre-populate in the app!